The Video Nobody Wants You To See

Regular readers will have noted that one of the Cutting videos has been unavailable for a little while. This video consists of a text interview with me. It was taken down by YouTube, but I'm really at a loss to understand why. It was removed when my publisher Elemental Press posted it, and removed again when I posted it.

The reason given by YouTube is that it violates their policy on self-harm, stating that the subject isn't barred from discussion on YouTube entirely and that some videos are allowed. I disputed the decision, saying "I am a little confused as to why this video has been removed. As far as I can see, it discusses but doesn't promote self-harm. I am a writer. I have a novel on the subject coming out this summer. The video discusses the novel, as well as some general comments on the subject. The novel also explores, but doesn't glamorise, self-harm. This is specifically stated within the video. For this reason, I would think it falls within your policy of acceptability. Please explain exactly what it is about the video that violates your policy." Within three minutes I received a reply stating "We have reviewed your content carefully, and have confirmed that it violates our self-harm policy. We know this is probably disappointing news, but it's our job to make sure that YouTube is a safe place for all."

Well, clearly they haven't reviewed the content 'carefully' since they had all of three minutes to do it in. In fact, I doubt an actual person has even looked at it, and I'm no closer to understanding what it is about the video that is so offensive. I wrote to YouTube again to ask if somebody could please clarify why the video is unacceptable. I have not received a reply.

YouTube did, however, send me a generic 'we're concerned about you' message, which can read below. How considerate. This seems to me, though, more an act of self-preservation than of altruism. I don't need their concern, I need them not to pull my videos without explanation. 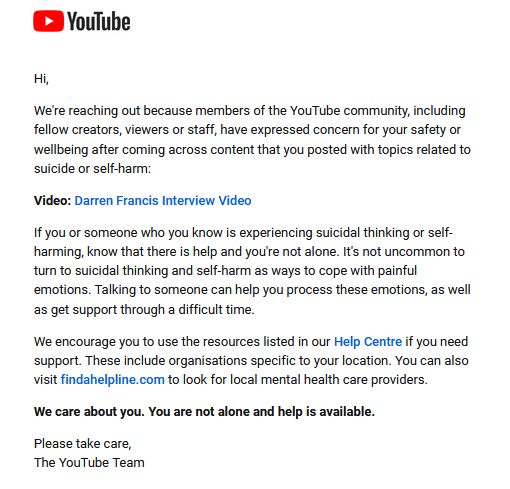 View the video at the link above and decide for yourself. YouTube did later accept a much-edited version of the video, which you can view here. If anything, this makes their initial decision all the more mystifying.

TikTok, meanwhile, have gone one further; all videos Elemental Press have posted relating to my novel have been removed from their site.

To my mind, this really doesn't help matters. As a book, Cutting explores the subject of self-harm in a non-judgmental manner and - I like to think - opens up a debate on the subject. Hampering the voice of that debate does nobody any favours.