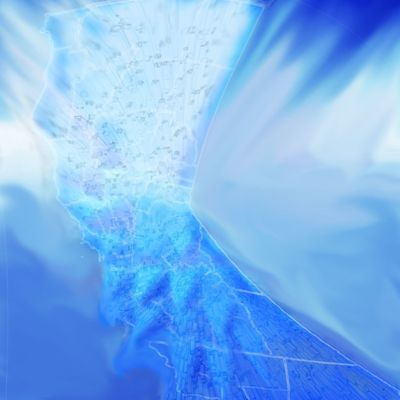 The fourth Logos album Santa Susana Blues was released on 9th August 2014. You can find out more about it on the Logos website here, or stream/download the entire album here or via the widget below.

I tend not to routinely post Logos updates on this site, partly because Logos have their own dedicated website and partly because I know that some of you are less interested in the unconventional sounds I make in the name of music and more in my literary and artistic projects. That said, a new Logos album is a different matter.

These tracks were originally created in August 2012, with final work and mixing done in July and August 2014. Four of them - Hungry Knife, The Last Door, 23 Years In The Tombs You Made, and Santa Susana Blues - were completely rebuilt at this stage and bear scant resemblance to the original preliminary versions; a couple of these initial drafts will feature on the forthcoming Logos album Everything Under The Sky, a collection of radically different mixes of tracks from all four Logos albums.

We'll be posting a more detailed look at Santa Susana Blues on the Logos website in due course.