I was very saddened today to learn of the death of H R Giger, one of my favourite artists, and who has had a profound impact on my writing and art. 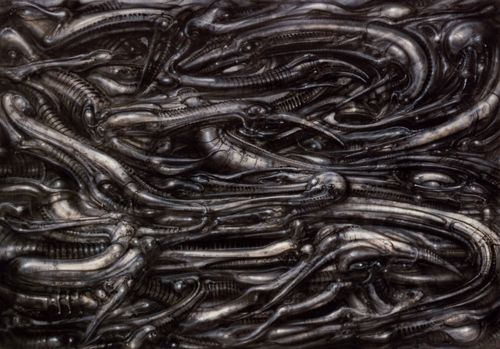 Like many others - and in particular nigh everybody who was a teenager in the 1980s - I first encountered Giger's work through Alien. It wasn't until the late 80s, however, that I picked up some books of Giger's images. Remember, this was in the days before the internet; I recently - and effortlessly - downloaded dozens of high resolution Giger images to use as desktop backgrounds, but back then the only way to own copies of an artist's work was to buy either prints or books. I spent many hours awed at those pages, so unlike anything I'd ever seen. When I began drawing, in the early 1990s, Giger was of course an inspiration. Both 'Gigeresque' and 'biomechanical' have become a lazy shorthand for a certain style of dark art, and one I've heard applied to my own pictures quite a few times. I've never denied Giger as an influence, along with my other primary artistic inspiration (and other favourite visual artist alongside Giger), Francis Bacon. Indeed, a friend defined my art as 'Giger fused with Bacon', which I can't disagree with and even found myself once using when asked to describe my drawings to someone who'd not seen them. 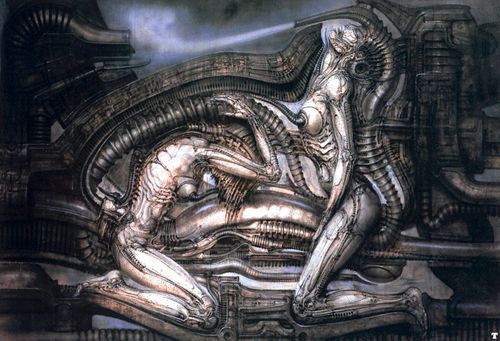 Even as my drawings developed their own style, I never lost my love of Giger (or, for that matter, of Bacon). Though I've always felt that my writing and drawing is more influenced by music than by other writers or artists, the impact of Giger and Bacon on my work and on my way of seeing the world cannot be underestimated, and I still find an ineffable pleasure in contemplating their images. 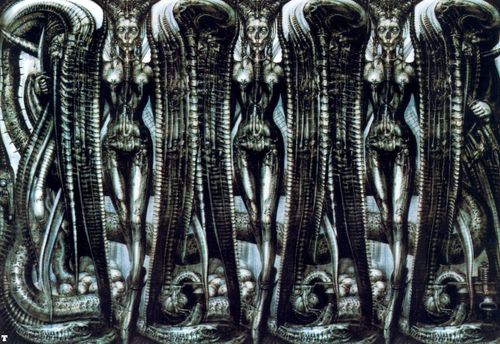 One final memory; in the mid-1990s I was tripping with some friends, and found myself alone. I don't recall if I'd left their company or they'd left mine. On impulse I picked up one of my Giger books. On mushrooms, the images were utterly extraordinary. Not only did they take on a remarkable three-dimensional quality, but the melding of organic and mechanical made absolute sense. To me, psychedelics often had a machine-like aspect, the brain and nervous system a glittering crystaline mesh or lattice; geometric, crafted, mechanised. Not in a materialistic or 'clockwork universe' sense, rather an infinite automated otherworld, fleshy and intelligent and alive. Those familiar with McKenna's 'hyperdimensional machine elves' might find a resonance here. This reverie, of being set adrift in sensual biomechanical dimensions, seemed to last an aeon, but was likely a minute or less; 'what are you doing?' my friend Steve asked, and I closed my Giger book and set it aside. Some realities are too outlandish to explain, even to a good friend with a head full of mushrooms. 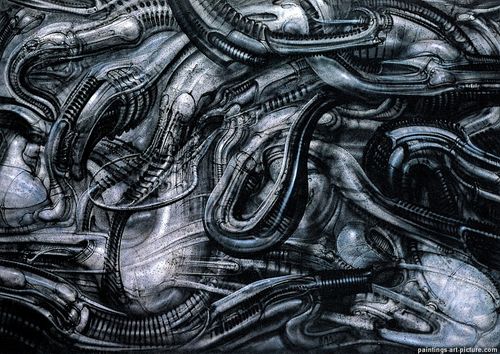 So thank you Mr Giger, and farewell; you took my mind to places I didn't even know were there. 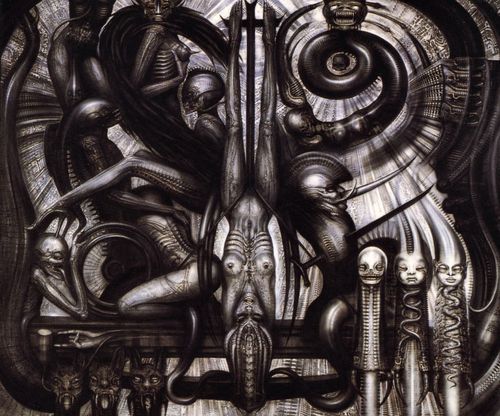 All images in this post are by H R Giger.