He Knows The Use Of Ashes

Yesterday I finished a very rough (45,000 words) first draft of a new novel. Now for the hard part, wrestling with all those words and putting it into shape.

The novel - currently untitled - grew out of a jumble of material I wrote back in 2009. I later recorded one section as a spoken word track, He Knows The Use Of Ashes. That title, of course, is borrowed from Pearls Before Swine (via This Mortal Coil) and the track The Jeweller, which is one of those rare tracks in that I equally adore both versions. This text has changed since I wrote and recorded it, and the version in the novel is somewhat different, but here it is:-

I created the first version of this in 2010, with completely different music, re-working it in 2012 and adding the new backing track. The multilayered voice was a happy accident; I'd done a rough guide voice, which I later re-recorded, and had the original playing very soft in the mix to aid me in adding the new voice. I liked the effect it created, and decided to keep it. Listening closely, you may also notice that the text differs slightly at some points between the two vocal tracks, due to mistakes I made when reading, which again I liked and opted to keep.

Here also, for the curious, are scans of pages from my notebook, showing the original text as I first wrote it back in September 2009. 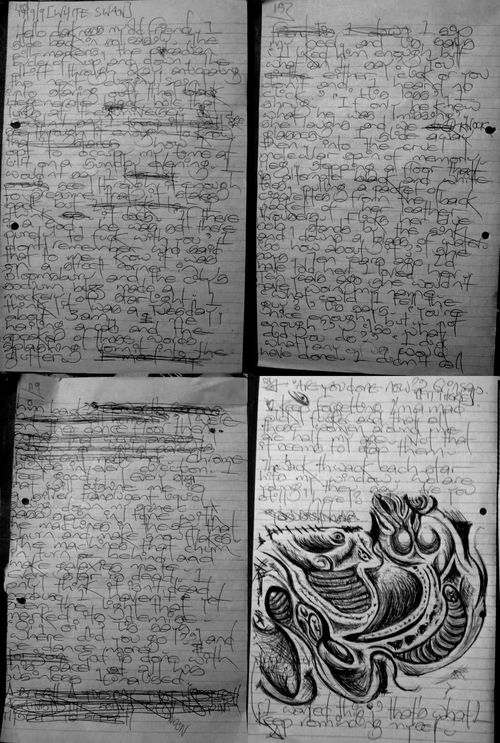 Here's the full text, for those of you having difficulty with my handwriting:

hello darkness, my old friend. i slide back in so easily. the pill-markers, the circadian cycle of up and down. the drift through okay, anticipating the next dizzying spin into staring out the degenerate black hole that lurks at the core of the universe; how i opt to spend my time at 6.17 on a sunday evening. i wouldn't say that i see through it enough to presume that it stares back at me, but i like to think that it does.

if there is a god, he was set there purely to fuck with you.' i don't remember who said that to me, know it was on a street corner in bloomsbury and the city's sodium buzz made a mockery of starlight; i think it was a tuesday, about 3am, me hailing a cab and the speaker of those words splashing vomit into the gutter.

'his loss,' i shrug; if only he knew what he was missing.'

she laughs, and we knock glasses. i slide away then, into the cruel molecular spin of memory. meg, stepping a floor that is alternate black and white tiles, pulling a packet of cigarettes from the hip pocket of her leather trousers. flicks her blue bob, stands by the sink and downs a glass of water. 'so, how about it?' she says. ten years ago, i'd have told her i loved her. ten years ago she wouldn't have worn my name.

'i did what any of us would have done. i didn't call him back.'

we're on the dance floor then. chrome glides in every direction. i feel good. every star that will outshine me is a silver translucent liquid sliding down my spine. a bass spin in tune with the machines in the sky that churn and make snowflakes. the machines that churn in turn behind and make galaxies mate. every star is dead. i only think it isn't dead because i haven't yet seen the light that marked its demise.

'where did you go?' tis says, and we dance more. god is done with this place, all his business finalised.